COVID-19 response: we are happy to support our customers with online workshops and online trainings. Share your challenge with us and we will get back to you shortly.

BrainStore is portrayed in Time Magazine

Time Magazine: one of the most famous magazines 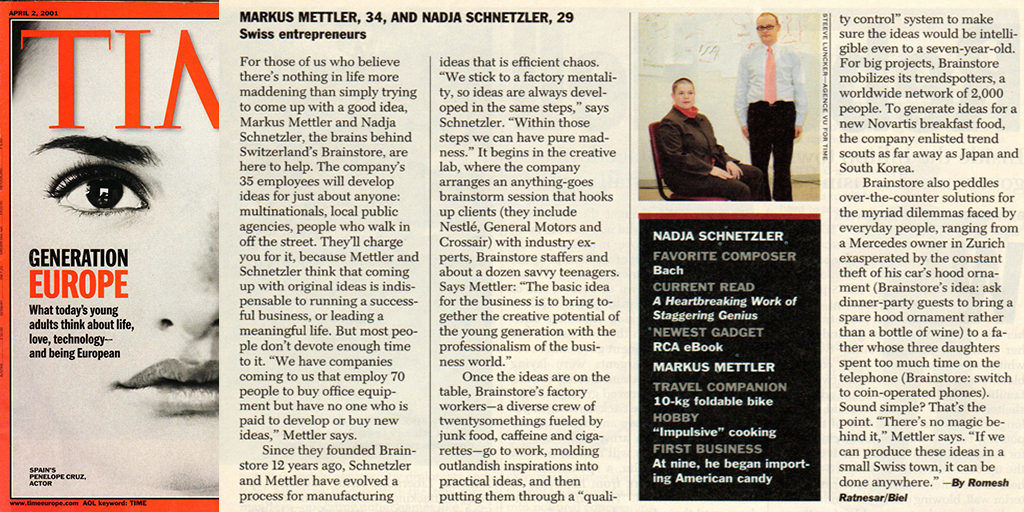 For those of us who believe there's nothing in life more maddening than simply trying to come up with a good idea, Markus Mettler and Nadja Schnetzler, the brains behind Switzerland's Brainstore, are here to help. The company's 35 employees will develop ideas for just about anyone: multinationals, local public agencies, people who walk in off the street. They'll charge you for it, because Mettler and Schnetzler think that coming up with original ideas is indispensable to running a successful business, or leading a meaningful life. But most people don't devote enough time to it. "We have companies coming to us that employ 70 people to buy office equipment but have no one who is paid to develop or buy new ideas," Mettler says.

Since they founded Brainstore 12 years ago, Schnetzler and Mettler have evolved a process for manufacturing ideas that is efficient chaos. "We stick to a factory mentality, so ideas are always developed in the same steps," says Schnetzler. "Within those steps we can have pure madness." It begins in the creative lab, where the company arranges an anything-goes brainstorm session that hooks up clients (they include Nestlé, General Motors and Crossair) with industry experts, Brainstore staffers and about a dozen savvy teenagers. Says Mettler: "The basic idea for the business is to bring together the creative potential of the young generation with the professionalism of the business world."

Once the ideas are on the table, Brainstore's factory workers — a diverse crew of twentysomethings fueled by junk food, caffeine and cigarettes — go to work, molding outlandish inspirations into practical ideas, and then putting them through a "quality control" system to make sure the ideas would be intelligible even to a seven-year-old. For big projects, Brainstore mobilizes its trendspotters, a worldwide network of 2,000 people. To generate ideas for a new Novartis breakfast food, the company enlisted trend scouts as far away as Japan and South Korea.

Brainstore also peddles over-the-counter solutions for the myriad dilemmas faced by everyday people, ranging from a Mercedes owner in Zurich exasperated by the constant theft of his car's hood ornament (Brainstore's idea: ask dinner-party guests to bring a spare hood ornament rather than a bottle of wine) to a father whose three daughters spent too much time on the telephone (Brainstore: switch to coin-operated phones). Sound simple? That's the point. "There's no magic behind it," Mettler says. "If we can produce these ideas in a small Swiss town, it can be done anywhere."

Need more info? Search for the topic of your interest.